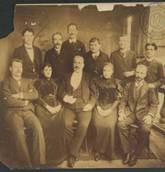 The Romanian Cultural Institute and
the Romanian Information Centre In Brussels

have the pleasure of inviting you to the film

GOLDFADEN’S LEGACY
The green tree
From Shetl to Brodway
Documentary about Avram Goldfaden
Founder of the Jewish Theatre, original playwright and pioneer of the musical
END_OF_DOCUMENT_TOKEN_TO_BE_REPLACED

END_OF_DOCUMENT_TOKEN_TO_BE_REPLACED

Since, at the end of March, all the effects of the Emergency Ordinance no.31/2002 are in danger of being lost, and the law is not approved yet, Mr. Razvan Theodorescu, at the request of Dorel Dorian, Deputy representing the FCER, sent the following open letter also published whithin the “Jewish Reality” magazine no. 180, 25.01-15.02.03. Unfortunatelly, not even this act showed any results, therefore the Emergency Ordinance was not discussed.


I fully understand your concern towards a possible obstruction of the Emergency Ordinance no 31/2002 in the Senate of Romania, especially at a moment when, unfortunately, both in the country and abroad, were consumed several acts which became undesired arguments favoring the urging of this kind of settlement. I assure you, that, by far, it is not the case of a premeditated action of freezing the discussions related to this project law, and therefore, I dare to remind you that at the end of the extensive discussions from the Senate commissions also attended by you and by other FCER representatives (Mr. Iulian Sorin, Osy Lazar) it was decided upon the voting of the Ordinance in the Plenum, at the end of June 2002. However, things hastened, as the first meeting date, on the 19th of June coincided on the agenda with the National Culture Forum; a second settled date, 27th of June, was on the eve of the Romanian Academy Session dedicated, not by coincidence, to Holocaust issues. The autumn Senate Session from 2002 was extremely dense with organic law projects, legislative laws, budgets discussions, common meetings along with the Deputies Chamber, motions when the introduction of the Ordinance on the daily agenda was requested… Realizing this delay which could also be interpreted as an obstruction, I solicited in an open letter on this matter, the Minister for the Relation with the Parliament, Mr. Acsinte Gaspar, to request from the Permanent Office of the Senate that the planning of the Plenum proceedings of the Emergency Ordinance no 31/2002 to be scheduled for February. On its essence, the principial position of the Ministry of Culture, and, I hope also of my party colleagues, remains the same: mutual unconditioned support of the juridic act, which as a fact is functioning and is showing results.


I assure you, Mr. Deputy, of all my consideration as well as of my sincere sentiments,


Razvan Thodorescu,
The Minister of Culture and Cults.


Translated from English by MCA Romania

The Centre for Monitoring and Combating the Anti-Semitism in Romania


In order to address the issue of anti-Semitism and its effects in Europe, Central Asia and North America, as well as to asses the role of governments and of the civil society in promoting tolerance, OSCE organizes a conference on anti-Semitism that is to take place in Vienna, on June 19 and 20. Abraham Foxman, National Director of the ADL (Anti-Defamation League) will attend this conference as a member of the US delegation, led by Rudolph W. Giuliani, former mayor of New York City. Nobel laureate Elie Wiesel is one of the major participants to this conference.


“The importance of the fact that 55 nations meet to discuss how to combat anti-Semitism cannot be stressed enough”, said Mr. Foxman. “Now that this issue has been acknowledged, we hope that the meeting in Vienna will take the fight against anti-Semitism to a higher level”. Mr. Foxman added: “I am proud to belong to the US official delegation and to the group of those who lead this fight.”


The conference in Vienna follows the OSCE cross-parliamentary forum on confronting and combating anti-Semitism that took place in Capitol Hall in December 2002. At this forum, ADL issued an 10-point operative agenda against global anti-Semitism and demanded that OSCE have each of its members initiate positive measures at home.


In his declaration before the participants at the forum, Kenneth Jacobson, Associate National Director of the ADL, urged the US and German parliamentarians to enlarge the alliance of the nations willing to adopt a firm attitude against anti-Semitism and to use the OSCE in order to “generate an acknowledgement and an understanding without compromises of the issue and of the need for urgent multilateral actions”. The parliamentarians signed a “letter of intention” consisting of a number of recommendations made by the ADL on the way in which they can respond to anti-Semitism, which is once again developing in the OSCE area.

The National Director of MCA Romania (an organization affiliated to the ADL) was invited to and will attend the OSCE conference on anti-Semitism that will take place in Vienna, on June 19 and 20.

Holocaust: the current Government takes the share of responsibility held by the Romanian State
half a century ago

The current Government takes the share of responsibility held by the Romanian State half a century ago for the victims of the Holocaust and states its wish to continue the cooperation with the international institutions researching this issue, shows a press release issued by the Government’s spokeperson.


The current Government is the one who initiated for the first time in democratic Romania a strong legislative action to condemn the fascist, Nazi, racist and xenophobic extremism, while the Prime Minister and other members of the Cabinet have stated that, unfortunately, the systematic action of extermination through deportation in concentration camps or through executions encompassed the fate of an important part of the Romanian Jews. “The Romanian Government in power during the period 1940-1944 is guilty of serious war crimes, pogroms, deportations in Transnistria, mass relocation of an important part of the Romanian Jewish population in territories occupied and controlled by the Romanian Army using methods of discrimination and extermination which belong to the sinister mechanism of the Holocaust.”


The Government also reminds that the Emergency Ordinance no. 31 of March 31 2002 bans the public denial of the Holocaust, condemns the fascist, Nazi, racist and xenophobe manifestations, and forbids erection of public monuments remembering war criminals. According to the press release, commemorative monuments for the victims of the Holocaust have been erected and the recent one in Targu Mures, created with Government support, is a telling example. The phenomenon of the Holocaust is studied in schools and the National Archives provide unconditioned access to the specialists studying the Holocaust in the Romanian space and the neighboring territories. Thus, Romania understands to contribute to the clarification of dramatic moments of its national history.

I am pleased to inform you that, at the initiative of President Ion Iliescu, Romania has resolved to create an international historical commission to examine the history of the Holocaust in Romania, and I have agreed to accept the position of chairman of this commission.

It is our expectation that the Commission will examine thoroughly and critically the events that took place between December 1937 and May 1945 that relate to the discrimination, isolation, internment, deportation and physical destruction of Romanian Jews, as well as the persecution of Roma. Attached you will find the adopted Statement of Purpose and Work Plan, which lay out in detail the full scope of the Commission’s work and its anticipated schedule. We are committed to the principle that the findings of the Commission will be accepted as definitive on this subject in Romania and throughout the world.

In order to achieve this goal, I respectfully invite you to join a select group of historians and representatives of key international organizations as a member of this commission. While there will be need for occasional face-to-face meetings of the commission, every effort will be made to conduct work via email and conference calls to lessen the burden on its members.

If you are willing to serve on this important commission-or if you require more information-I ask that you inform Dr. Radu Ioanid, who has been designated a vice chairman of the commission. A formal announcement of the commission’s creation will be made by President Iliescu in Bucharest on October 22, and the work should begin in earnest shortly thereafter.

being confronted with the text of the “letter of repentance” allegedly sent by the senator Corneliu Vadim Tudor to the elections expert Eyal Arad on February 1;

examining the implications of this text in the context of the Romanian society, thus, not only from the perspective of the senatorâ€™s attitude towards Jews or towards the Jewish community in Romania;

appeal to the Romanian public opinion and to the decision factors in international politics, signaling on the danger that the cynical traps laid by this famous character in his populist effort represent. The electoral goal cannot be denied â€“ the possibility of the Great Romania Party’s participation in a future government and the escaping of the discomfort caused by international monitoring. Although he invokes Christian reasons in order to account for his “conversion,” one can easily see that Mr. Corneliu Vadim Tudor did not “negotiate” his sudden transformation, from leader of a suburban anti-Semite clique into an admirer of the Jewish people, with a confessor who might have listened to his confession and inflicted an unbearable soul torment, but with an “electoral juggler” whose record speaks for itself. The sincerity of his “repentance” is more than doubtful, especially when one can see, by examining the contents of “The Great Romania” magazine edited under the leadership of the figure-head of the Great Romania Party, that articles reeking of anti-Semitism and denial continued to be published in this abject publication in the period AFTER the day on which the letter is dated. Moreover, inadmissible sexist remarks aimed at Sandra Simovici, Israel’s cultural attachÃ© in Bucharest, were added to the list.

Also, we note that the senator’s “repentance” does not include the sins against the Romanian people. We believe that a genuine repentance should have begun with this chapter of his past, with the days of the infamous Week and up to the “lists of shame,” including the episode of the miners’ revolt of 1999. We appeal to the leaders of the Romanian Federation of the Jewish Community to take this aspect into account before mentioning, even as a “theoretical” possibility only, a future dialogue with this character.

The leader of the Great Romania Party would perform any populist clownery, and his partial or full recognition of these “gaps” wouldnâ€™t represent a surprise. Just as his “transfiguration” concerning the Jewish issue fails to convince us, in the same manner we will not be convinced by any of the electoral rabbits that Mr. CVT might pull out of the hat.

The only way to convince Romanians and the international public opinion of the sincerity of this change would be (at least) not to use it as a means to electoral ends (that is, not mentioning it at all). Withdrawing completely from the 2004 presidential elections (and not only these), accompanied by a long period of introspection would be even more convincing.
With regard to Mr. Eyal Arad’s expertise, we appeal to those who have employed him or intend to do so in the future to take into account the ethical aspect of this matter. By collaborating with Mr. Corneliu Vadim Tudor, Mr. Eyal made use of his democratic right to choose his clients in the context of a market economy. We draw attention to the fact that this right is not reserved exclusively to Mr. Eyal and that it also functions reciprocally.